In high school, I was thrilled when they asked me to read the daily announcements over the PA system. The thrill was short-lived however, as I was sent to detention after I was heard impersonating the principal.  While I was attending Wayne State University in Detroit, I started an internship at the now defunct rock station WLLZ.  When I wasn’t fetching coffee for the morning host Ken Calvert, I would go to the production studio and record myself doing voice impressions.  Then I would leave cassettes('member those?)of the impressions on Ken’s desk.  One day Ken called me up and asked if I would be interested in calling in to the show as Bill Clinton once a week. Well I sure didn’t need to be asked twice!

For over two decades, I've been talking into a microphone – or telephone - on morning radio shows across the country – and as a voice actor, performing voice-overs for multiple media platforms & purposes, serving clients like AT&T, FX Networks, and Ford Motor Company, among others.

After serving successive full-time tours of duty with broadcasters Mojo in the Morning, Dick Purtan, and Rick Dees, I launched my own voice-over studio business, along with my wife, who runs her own successful photography studio.

When I'm not talking into a microphone, I'm usually spending time with my wife and kids, and our mini-labradoodle, Gordie. 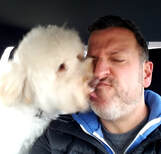